City by the Sea 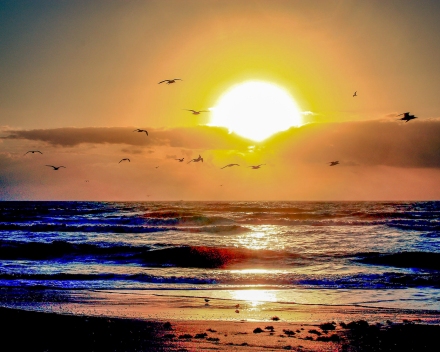 Dreams are seriously strange things, throwing logic and physics out the window. While most can be utter gibberish, once in a while one strikes an unusual chord. Dreams like this remind me of episodes of The Twilight Zone or other film shorts designed to bend your brain.

Last night, I had one that really tossed me for a loop, not the wake up gasping and sweating type, but the kind you can’t stop thinking about. (This is how you wind up at the keyboard)

My wife and I have long yearned to live near the ocean, or at least spend more time there. So, in my dream, there I was strolling along the sidewalk with the sound of waves crashing gently in the background. Look one way and I could see across the boardwalk to a wide, white sand beach. Look the other way and there was a cozy mix of bungalows, hotels and streets that ribboned away into different neighborhoods. I began running, not from fear but just feeling energetic. I jogged down one of the streets, past beautiful houses, lush green parks and local shops.

Along the way, the streets changed, some paved smooth, some of cobblestone and others of neatly graded sand and gravel. Up a winding hill, across from a steep face of stone, I stopped at a house I somehow recognized as my own (It didn’t look at all like my current house) but it just felt like home.

My car was parked out front (again, not one I recognize in real life) but I noticed a dent in the front fender. I walked over to survey the damage closer and reached out to touch the rumpled area when it magically straightened before my eyes. My neighbor laughed and said, “So that’s your power! I’ve been wondering what it was you could do.”

He went on to explain that everyone there possessed some form of transformation/creation skill and they used those talents to the benefit of the community. As time passed, I found I could do far more than straighten a dent. I could touch a vehicle, feel its problems or failures and correct those problems just by thinking about what needed to happen. My skill grew to the point I could physically change its size, shape and color, all just by stroking my hands over it like some magical sculptor. Needless to say, many sought me out, but never was there any mention of cost. Many of us exchanged the talents we had and everyone seemed happy to do so.

I crafted myself a sleek estate car and would spend afternoons showing newcomers around the neighborhoods, helping them find the places they loved best. After a time, it became evident where the self-centered and greedy types would congregate and I began to fear the beautiful city by the sea would be ruined. I transformed cars for quite a few of these people, only to watch them bash and crash them with glee and ask me to make them beautiful again.

The bulk of these people possessed the ability to pull diamonds from the sand or change rocks into gold, hence they felt nothing couldn’t be made whole by waving about such items. The gaudy jeweled section of town kept growing until I finally began leaving my car at home and walking quietly near the beach or jogging through the parks. Often I would actively run away when I saw others just hoping for solitude and the joy I remembered from the first day.

My neighborhood became more and more silent and I seldom saw anyone outside, forcing me to wonder if they felt the same as I did. Then one morning I drove around town, enjoying the glorious early morning sun as it painted the clouds. I cruised past the gold and jewels neighborhood and it was strangely silent with not a soul in sight. I suspected it was just sleeping in after too much night life. Not giving it much thought, I took a leisurely route back home, thinking about changing the color of my car to the lovely orange tones of the morning sun.

As I walked to the house from the driveway, I was struck with a lightning pain in both my shoulders and down my arms. The sensation was intense and I felt my hands go numb. I staggered into the street and fell against the rock face across the road, gasping from the pulsating pain. In shock, I noticed my hands were now the same white stone as the rock face and I sank to a sitting position, trying to call for help but I had no voice. As I looked past my home at the ocean in the distance, I wept, recalling all the joys I felt living there. Only then did I realize it wasn’t just my hands that were stone. I was no longer sitting there, I was the stone, inside it, like Alice through the looking glass. Suddenly, I realized life there was over and the world inside the stone was completely unknown. This was where all my neighbors had gone and for that matter, everyone else at some point in time. Each in turn must have become a part of the world they relished.

For me, I reached out and touched the stone, now from the inside as if it were a picture window, unable to pass through back to where I was. I looked at my hands, now pristine and perfectly normal but my aforementioned power either gone or useless in my new world. I wondered what could I do with them now? I suddenly felt warm and turned around to see the beautiful orange light I had risen so early to see.

Here comes the sun…and I feel like I can fly.

Is this how Superman feels?

But it was just a dream…